Why David Baddiel is helping to change the conversation about Dementia 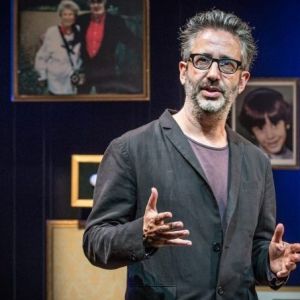 David Baddiel has had a lot to say recently about dementia both on stage and TV.  But he is keen to stress he is a comedian and not a campaigner – albeit one who is happy to give voice to the issues that families living with the disease face.

At the heart of his stage show My Family: Not the Sitcom, are searingly honest stories about his late mother Sarah, and his dad Colin and the dementia which has enveloped him.  Those experiences – his mother’s openness about her affair with a member of the local golfing society, Colin’s indifference to this, and his subsequent decline from Pick’s Disease – are both unique to David, and yet also universal – a brutally funny and honest look at real family life that we can all relate to.

The show and the media attention around it has done something else too; it’s helped change the discussion around how we see, and act towards, our relatives as they age and struggle with illnesses such as dementia.

For him, the comedy lies in stripping back the sentimentality and sugarcoating that all too often happens within families when a loved one has died, or we lose them through dementia, and to acknowledge the reality and say ‘hang on it wasn’t really like that’.  In fact, he argues that if all you can say of your loved ones is that they were wonderful without calling up their “weaknesses, madnesses, and flaws”, then you may as well not remember them at all.

Little wonder then that the critics loved it, with reviewers hailing it amongst other things as a ‘rare production that boasts side-splitting laughs and also moves people to tears’ (Evening Standard) and a show which is ‘compelling to watch both for its unvarnished truth and complicated affection’ (The Guardian).

So, was his goal to play out those difficult conversations right on stage?

“The manifesto of the show is to say ‘here are the things people don’t talk about with their parents or families’,” he says. “I do think it’s good to have these conversations. People often say that the show is brave but there’s a part of me that doesn’t feel that.  “I don’t find the conversations quite as difficult,” he adds. “Maybe I would have done if I was talking directly to my parents.”  But despite the plaudits, you sense it is the audience’s reaction which touches him most.  At the end of the stage show he has a Q&A with the audience and he often finds they open up about their own experiences.

You wonder if talking about his own “particularly weird childhood” is both cathartic for him and those watching?

“People respond to it amazingly,” he says. “Nobody else had a mum like mine who had an affair with a member of the golfing society; nobody else has had a dad like mine, but everyone has had something in their childhood.  “One of the interesting things about the show is that it does include stuff which has a bit of cringe factor about it.  “Luckily a lot of people of all ages respond to it in different ways. I would say the sweet spot is between the ages of 35 and 55 and those who grew up in the 1970s. Our parents didn’t stop for us they just lived their lives.

“I am dealing with the same problems anybody with a relative is dealing with. It’s about how to care for them, and how to respond to them. They are still there, although it sometimes feels that that they are not. “It feels pretty liberating as far as I can make out in terms of what people talk about afterwards.  “I invite people to ask questions and people will start to tell me things about their family, which they wouldn’t have told anyone else in a public way. I have given them licence to do that.

“What I want to try to do a little better as far as dementia is concerned is change the conversation about it. Most people think when you say ‘my parent has got dementia’ that that is the end of the story. That’s not what happens because their personality expands. It can be difficult, but it doesn’t mean he isn’t there anymore.”

One of the things that is striking about David when talking to him is how normal he is.  But fame clearly brings a wealth and privilege, and so you have to ask whether his experience dealing with his dad is in fact different to the typical person in the street?

“We are lucky certainly to have enough money for my dad to live at home with carers,” he says. “To be honest it would have cost the same amount of money to put him in a care home, but at the time he wouldn’t have gone into one, and I’m glad we didn’t do it.  “I don’t think we are very different, we are better off, so in that sense we have been able to do that. But it’s still very expensive. Last year my dad had a number of urinary infections and we had to go back and forth to hospital. It was difficult to know what was going to happen.”

To mark Dementia Awareness Week, David is involved in several events.  “I am doing a few things,” he says. “There’s one show I am doing in support of Dementia Awareness Week where we have got 50 tickets available and at every show I offer 10 tickets to carers and that’s had a big take up.  “On the Friday I am also the continuity announcer for Channel Four and on every link I’ll be saying something about dementia.”

So is he the ‘go-to’ dementia guy, after all?

‘No! I just do what I want to,” he says. “I have always spoken about my life and the things happening to me in my comedy.  “When I was younger it was talking about sex, and football, and pop music. Now I’m older it’s more about death and mortality!  “In the main I am responding to things around me and I want to use that to tell stories and make a narrative.  “There was a campaigning element around dad. And as I have spoken about it, organisations that are trying to raise consciousness and money have all got in touch and ‘claimed’ me.  “But that isn’t my project, that’s just what I wanted to do. I make comedy and I am a writer. It’s just I am much better at telling stories and making people laugh.

It’s clear that social care is in a mess

Yet while he may reject the ‘campaigner’ tag, he clearly feels strongly about the state of the country’s social care system.  “I think it’s clear that social care is in a mess,” he says. “The NHS hasn’t got enough money to deal with it. That was clear from my own experience when my mum died. She was admitted to hospital in an emergency situation and died in a way that possibly could have been prevented.  “But it isn’t just about money, it’s also about psychology – attitudes need to shift.  “That is happening, partly because there are more older people who have money and are still visible and aren’t just fading away.”

Baddiel on Trump up next?

David’s show is currently showing at the Playhouse Theatre in London until June 3.  After that he says it may take it to New York, followed by a UK tour.  And speaking of politics, he says that the current state of the world has made him ponder about whether it is a theme he will develop for his next project.   “I am not very interested in politics with a capital P. When I started doing comedy everyone was political and I consciously rejected talking about Maggie Thatcher.  “Then John Major came along and after that politics was pretty bland. Now politics is pretty nuts. “I think Trump just dominates everything, and the fact that he is the President of the United States, though it’s hard to have an English voice on it.  “But politics has become more comedic.”

Social media and the way it has changed the way we interact with each other is another topic on his mind.  “If you have seen the show there’s quite a lot of social media in it,” he says. “I am wondering about doing a show on social media because it’s such a big part of our lives.  “I wouldn’t want to do a show about the bubble of social media, but using it to talk about what it’s doing to us as human beings, in terms of empathy and relating to one another.  “There might be something in that and doing something around politics.”

Show details: runs at The Playhouse Theatre until 3rd June.

Here in the AgeSpace bunker, or more accurately, our various mini-bunkers, we’ve sp...

As we head into autumn, it’s important now more than ever to ensure our homes and those of loved ones are dr...